Analysis of electrode resistance before and after cell disassembly

In the process of cell failure analysis, it is the most common way to analyze the performance characterization of the electrodes before and after cell disassembly1But after the dismantling pole due to the surface residual electrolyte, by-products, precipitated lithium and other kinds of substances, make the researchers in the analysis of active material changes are affected to a certain extent, in order to remove the surface by-products, generally use D MC solvent immersion, but this way has literature found that it will affect the swelling of P VDF, thus affecting the mechanical properties of the pole2. When we analyze the resistance correlation between the D CR of the cell and the electrode, we should also pay attention to the change of the surface state of the cell before and after the disassembly. In this paper, the resistance of different S OC states will explore the influence of the cell disassembly on the resistance test, so as to provide a reference method for researchers to characterize the performance of the electrode.

1.1 Experimental equipment: model B ER1300 (I EST Yuan energy technology), electrode diameter of 14mm.The equipment is shown in Figures 2 (a) and 2 (b). 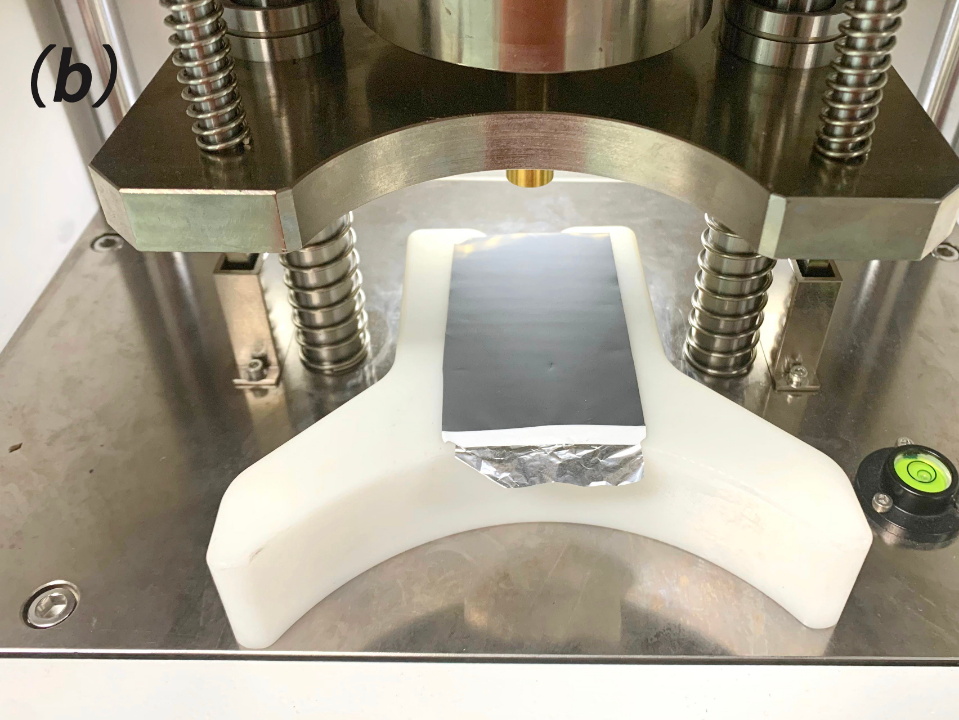 2. Research on the correlation between cell D CR and electrode resistance

The DCR internal resistance test of different SOC was performed during the charge and discharge process, and the 1.5C fold discharge was used for 10s to analyze the D CR change trend for 1s and 10s, respectively.According to the results in Figure 4, as the S OC increases, both 1s and 10s DCR showed a trend of "bath curve".In the process of stripping / lithium embedding, the resistance results are significantly correlated with the SOC state due to the crystal structure changes of the electrode material and the equilibrium potential curve.In the middle SOC state, the potential region of the material is stable, and the battery voltage changes slightly, showing a lower battery impedance, while in 0% and 90%SOC, the material balance potential changes rapidly, showing high resistance.

Figure 3. The D CR test process of the electric cell

22.2 Analysis of electrode sheet resistance before and after cell disassembly

Figure 6. Changes of the surface state before and after the disassembled positive and negative electrode sheet is soaked in DMC

According to the above test results, the original fresh electrode piece test has the lowest resistance, and the resistance will increase when the pole piece removed from the battery is dried and tested again.Fill the electrolyte, The electrolyte will make the following changes in the electrode sheet: (1) the dielectric constant between the particles is changed, May block the electronic transmission, The gap tunnel of electrons through the solid particles may require a higher local electric field; (2) Binder swelling, The swelling of insulating binders causes the dislocation of fine conductive carbon particles, resulting in a larger gap, Disruption the conductive network, therefore, Increasing resistance between particles; (3) electrolyte membrane generation on the particle surface, The electrolyte and the solid particles form a solid electrolyte interface membrane when charging, This also increases the resistance.When the electrode sheet is soaked in DMC, the electrode sheet resistance increases further.In addition to the swelling of the binder, the solvent will also soak off the particle surface residual lithium salt, interface film, by-products, so that the formed stable conductive network is destroyed, the resistance is further increased.

In this paper, the cell D CR and pole resistance of different S OC states are characterized, and it is found that the change trend of the cell D CR is consistent with the difference of the dry pole and the D MC, which leads to the absolute value and uniformity of the pole resistance, especially the negative electrode.Therefore, the lithium developer analysis of the electrode should pay attention to the impact of the electrode surface by-products on the test results, and also pay attention to the impact of D MC soaking process on the surface state.