Lithium-ion battery is an electric-heat-force coupling system, which has expansion problems in the actual use process. On the one hand, the SEI film is formed, and the air pressure inside the battery increases, and the thickness of the SEI film increases, thus causing the expansion of the cell; on the other hand, Li+ is charged and discharged The embedding and removal between the positive and negative electrode materials will cause a structural phase transition, which leads to the expansion phenomenon, which is mainly reflected in the change in the direction of the negative electrode sheet thickness. The expansion behavior of lithium-ion battery is closely related to its reliability and safety. In the process of laboratory research, two parameters of expansion force and expansion thickness are usually used to evaluate the change of the expansion behavior of the battery in the charge and discharge process. The irreversible stress inside the battery also accumulates with the charge and discharge. Studies have been shown that Li+ during charge and discharge Diffusion impedance will increase with the increase of irreversible stress, but the appropriate stress increase can reduce the loss of active lithium, thus reduce the decay rate of cell cycle capacity, battery research and development process analysis of the change of the expansion performance, for the assembly of the appropriate assembly pressure has an important guiding significance. Figure 1 (a) shows the experimental principles of the reported external constraints and EIS tests¹; (b) The change of impedance under different external pressures²。

Figure 1 (a) Experimental principles of external constraints and EIS tests¹

More and more studies have shown that increasing buffer substances between batteries when installing a lithium-ion battery assembly can effectively reduce the expansion force of the battery and improve the electrochemical performance of the module. This paper chooses a silicone foam to increase the change of the cell expansion force and expansion thickness before and after the foam.

2.Test process：2.1 The cell information is shown in Table 1.

2.3 Cell thickness expansion test: put the battery to be tested into the corresponding channel of the equipment, open the MISS software, set the corresponding cell number and sampling frequency parameters of each channel, and the software will automatically read the cell thickness, thickness change, test temperature, current, voltage, capacity and other data. 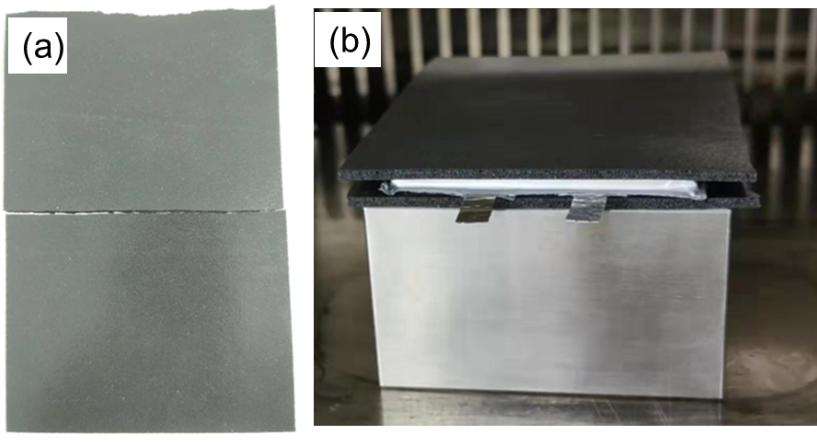 1. Expansion thickness and expansion force change during charge and discharge

Table 2 .has the test results of the expansion thickness and expansion force of each cycle under foam

It is reported that the appropriate mechanical pressure to the battery, can effectively shorten the path of Li + migration, reduce the loss of Li + to improve the service life of the battery, but the negative material layer spacing reduction, van der Waals force between layer, thus increase the resistance of Li + out, capacity reduction, subsequent can be combined with the same foam material different pretension force size and long cycle test from a deeper mechanism analysis.

Figure 5 shows the charge-discharge differential capacity curve, expansion thickness and thickness, and force change curve of the cell, Where (a) and (b) are in the constant pressure mode, Schematic diagram of expansion thickness changes and charge-discharge differential capacity curves, In (c) and (d) in constant gap mode, Schematic diagram of expansion force change and charge-discharge differential capacity curve, As can be seen from the figure, For this LCO system battery, The inflection point of the expansion thickness or the expansion force change during charging can correspond to the phase change peak of the positive and negative electrode lithium embedding, It is further clarified that the expansion effect of the battery in the charge and discharge process is mainly related to the structural phase change caused by the positive and negative electrode embedding and the lithium process. Under the condition of short-term cycle, whether there is foam and constant pressure constant gap different measurement mode, the two variable conditions on the peak of the differential capacity curve and cell capacity is little affected, but if considering long-term cycle conditions, may have greater influence on cell capacity attenuation, subsequent can be combined with specific test results for further analysis.